Moderated by: Arica Maurer, Director of the Buchanan Initiative for Peace and Nonviolence at Avila University

Jessica Cuevas (she/her/hers) is a first-generation college student and three-time alumna from Mount Saint Mary’s University, Los Angeles. As a student, Jessica served as a resident assistant and head resident assistant in her last two years at the Mount. In 2001 she earned a bachelor’s degree in Business Administration with an emphasis in accounting and a minor in Spanish and went on to work for one of the big six accounting firms. Her joy for working with students and empowering them in their educational journey led her to return to Mount Saint Mary’s University as Assistant Director of Residence. Jessica also earned a Master’s degree in Counseling Psychology and a Master’s degree in Business Administration (MBA) from the Mount. In 2016 after 13 years in Residence Life, Jessica went from Director of Residence Life to become the second Dean of Student Life at MSMU. Jessica has received training and certifications in Title IX, Restorative Justice, Mental Health First Aid, Trauma Informed Care, and Motivational Interviewing. She is passionate about our Catholic identity and aligning these values to the programs, services, and environment within the Division of Student Affairs.

Emile DeWeaver (he/him/his) became a published writer, community organizer, and co-founder of prisonrenaissance.org while serving a 67 year to life sentence. Former California Gov. Jerry Brown granted him clemency in 2017. Emile is interested in internalized systems of oppression and how they prevent us from building and maintaining effect models of justice. He guest lectures at social justice venues and in universities about his written work, what he calls liberation models, and what he calls the lying fiction of criminality.

His written works comprise over 50 published articles, essays, short stories, poems, plays, and curricula. His community organizing includes education and communication campaigns to pass four senate bills and Proposition 57. His organization is the first nonprofit founded and run by incarcerated people. Their aim is to take prison administration out of prison programs as a step toward prison abolition.

Sean Horrigan, PhD (he/him/his) is the Director of University Centers and Staff Development at the University of San Diego (USD). Previously, he served as the Director of Student Conduct and founded the restorative justice program at USD implementing restorative practices across various functional areas in Student Affairs. He has lectured in USD's School of Leadership and Education Sciences and is an adjunct faculty member in the College of Professional Studies at National University teaching courses in leadership, group dynamics, and adult development. Currently, Sean teaches in USD's certificate program for "Restorative Justice Facilitation and Leadership". He has a BA in Education from the University of Northern Iowa and an MA and PhD in Leadership Studies from the University of San Diego. At USD's Center for Restorative Justice he is on the leadership team of the RJNCC (Restorative Justice Network of Catholic Campuses) and is a restorative justice facilitator and trainer.

Heather Thompson (she/her/hers) has been a legal assistant with the Public Defender's office since 2017 and currently volunteers as a restorative justice facilitator with the DC Peace Team. Prior to that, she worked with a non-profit organization that focused on bail reform. From 2007-2015, she was a Courtroom Clerk at the Montgomery County Circuit Court in Rockville, Maryland. She is a recent graduate of Montgomery College, where she earned two associate degrees. Heather has participated in victim-offender dialogues in the past and is a passionate advocate for criminal and social justice reform.

Arica Maurer (she/her/hers) is the director of the Buchanan Initiative for Peace and Nonviolence at Avila University, where she also serves as adjunct faculty in Peace Studies. Prior to her transition to higher education, Arica worked for the U.S. Department of State managing grants in conflict-prone areas such as Iraq, Afghanistan, and Pakistan. Arica has also lived, studied, and conducted research in post-conflict Lebanon and Colombia. She earned her M.A. in international peace and conflict resolution from American University's School of International Service (Washington, DC) as well as a bachelor's degree in political science and international studies from the University of Kansas (Lawrence, KS). 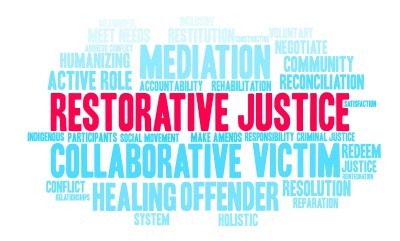