The U.S. Federation of the Sisters of Saint Joseph hosted their third Restorative Justice Workshop on Thursday, November 19. Leaders who are practicing restorative justice gave brief lectures about how they apply the concepts of restorative justice to their lives and ministries. This was accompanied by a dynamic panel discussion in which attendees asked our panelists critical questions, leaving tangible suggestions on how to translate these values into our own lives.

Panel members for this discussion included:

After each speaker introduced themselves, we opened the floor for questions. The first question of the evening was “are there any instances where restorative justice practices can go wrong and what are those and how can we avoid those?”

Heather, having personal experience with victim-offender dialogue responded first. To gain closure after her brother’s murder, Heather had a peace-making circle with his murderer. This took place many years after her brother's death and required six months of preparation for the conversation. Heather describes the conversation as, “the most humbling experience … it was empowering, at the end of it I was able to gain that closure that I needed. I realized it wasn't about forgiving him, it was about me forgiving myself for being so angry and having those feelings. Things happen, and one mistake in life does not define you.”

At the end of that peace-making circle, Heather promised to return and visit a few months later. Unfortunately, the second conversation did not go as well – which she was prepared for. Heather is considering returning in a few months to see if they can “go back to that first conversation feeling – if not though, that is totally ok.”

Sean was able to approach the question from an academic point of view saying, “I sometimes say that restorative justice has a great power to heal but it also has the power to destroy if practiced poorly.” He then outlined the three main ways he’s seen higher education get restorative justice wrong, beginning with “the importance of preparation time for the dialogue … we'll spend multiple opportunities to meet with a student offender or the harm party getting them to a place where they can feel safe and that the process will work.”

He also cited that campus conversations go wrong when students lose trust in their facilitator. “I see processes go wrong when they're not trauma informed and when they stop short of addressing the root causes of the injustices,” said Sean, continuing “if we just deal with the interpersonal conflict then we don't deal with the historical and root causes of harm … we are not doing our best work, things might seem really nice between two people but we've stopped short of the power and possibility of restorative justice.”

Following this a member of our audience asked, “many catholic colleges have enslaved persons in their histories what specific restorative practices are being or can be implemented to address this slaveholder issue. How do we stop investing in racist corporations?”

Sean was the first to respond explaining, “frankly we're not just talking about the history of slavery but we're talking about the visible symbols of that history that are on some of our campuses.” He went on to say that fully addressing these on campus issues, “requires leadership to know that the campus will not fall apart if we have these hard conversations. Communities are craving those conversations.”

The answers and guidance some higher education institutions might not be that far according to Horrigan. “The young people who are on our campuses are way ahead of us in on these topics and if we stop to listen, if we act upon what they're asking for we will make our campuses better and our students will be better for it,” said Sean. “It will enrich their educational experience. I think we'll live into our missions a lot more as a result.”

Acknowledging the perpetuation of harm by many institutions, panelists were asked, “What are resources for individuals or organizations who have caused harm where do we go for support?”

Emile highlighted the complexity of the issue, saying we are not in a society that has the institutions made to facilitate accountability of power. Further he believes asking, “how do we rectify harm we've done is to speak from a position of power.”

To remedy this Emile suggests we need to build these institutions and most of all our society, “has to be uncomfortable to develop ... that's going to open up more possibilities for us.”

Lastly, panelists were asked “how restorative justice in your professional life has been helpful for you as an individual outside of work are there ways that you recommend incorporating restorative practices into our daily lives?”

On a personal level, Heather explained how she uses restorative justice principles with her two sons and their friends to talk about their community. She explains that as a mother of two black sons, whose friends are also black and brown, she worries about them every time they leave their home. Heather feels that, “to have those uncomfortable conversations gives them the tools that they need to be successful or as close to be being successful on the outside when they may encounter something that they're not used to or that they shouldn't have to encounter.” Her sons and their friends enjoy the conversations, often unaware that they’re learning these principles in the moment.

Jessica spoke about her student community at Mount Saint Mary’s University. She believes that providing a safe space for these conversations is vital to their growth. She is pushing her students to be more than “just being friendly and nice.”  “We need to really share so that we know how we're feeling so that we can move with healing.” She explained that this is often just the smallest of steps and something she plans to incorporate for the rest of her life.

Our next Restorative Justice Workshop will be featuring Sister Helen Prejean, who will speak about restorative justice in her life and in her ministry. It will be taking place Tuesday, December 15 at 8 pm ET/7 pm CT/6 pm MT/5 pm PT. Those who would like to attend can register at this link. 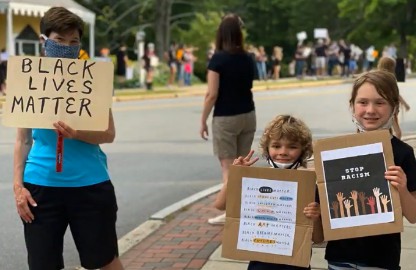