Sr. Maryellen Kane, a Sister of St. Joseph of Brentwood, became the executive director of the U.S. Federation of Sisters of St. Joseph on January 1, 2020. Prior to her role at the Federation, she served as Parish Life Coordinator at the St. Mary Magdalene Parish in Queens, New York City for the last 15 years. Previous to this, she served as Pastoral Associate in a number of parishes in the Diocese of Brooklyn.

From 1994 to 2000, she was a member of the Sisters of St. Joseph of Brentwood, NY Leadership Team, coordinating their office of mission and ministry. During this time, she also served as a member of the National Board of the Leadership Conference of Women Religious (LCWR) and chairperson of the New York State Conference Region 2. Additionally she has served on the Advisory Board of the NY State Labor and Religion Coalition, National Advisory Board for New Ways Ministry, and the Governing Board of the U.S. Federation of Sisters of St. Joseph.

Since 1982, she has had extensive practical experience and training in Community Organizing, including Industrial Areas Foundation National Training and mentoring and supervision in action and strategies. While serving on the Pastoral Team at St. Barbara Parish in Bushwick, Brooklyn, she was a leader in East Brooklyn Congregations. While on the staff of the Intercommunity Center for Justice and Peace, in conjunction with the Industrial Areas Foundation, she worked with local churches to develop broad-based community organizations in the South Bronx, East Harlem and the Westside of Manhattan.

In 1978, along with three other sisters, she co-founded Providence House Inc., houses of hospitality for homeless, abused, and formerly incarcerated women and their children. She lived as a core member in three different Providence Houses for 18 years. Her professional life began as a teacher in elementary schools in the Diocese of Brooklyn and served for four years as an organizer with the United Farm Workers in California and Florida. Sr. Maryellen received her B.S. in Education and a M.A. in Pastoral Ministry, with a concentration in Social Justice/ Social Ministry from Boston College.

Prior to working at the Federation, she worked as a freelance reporter, featured in National Catholic Reporter, Global Sisters Report, and U.S. Catholic Magazine. She was the 2016-2017 Bertelsen Editorial Intern for National Catholic Reporter, where she cultivated her reporting on the death penalty. In 2018, she won first place at the Catholic Press Awards for pro-life reporting on the death penalty and second place for best personality profile for her feature on Sister of St. Joseph Helen Prejean.

Kristen is also a fierce healthcare advocate. She is the chapter leader for T1International's Connecticut #insulin4all chapter, a group that advocates for affordable and equitable access to insulin and diabetes related supplies. Her testimonies have been featured at the Connecticut state capitol and the U.S. Senate floor. In 2020, she attended the Presidential State of the Union as a guest of U.S. Representative Rosa DeLauro. She has been featured in and/or written for: BBC, Berlingske, CBS Evening News, Financial Times, NPR's "All Things Considered," WNPR, Hartford Courant, Connecticut Post, and more. Kristen is a proud graduate of Quinnipiac University, with a B.A. in psychology and political science.

The Federation is governed by the Leadership Assembly which is composed of all the Leadership teams from our member congregations. This group meets annually in November for direction setting and corporate responsibilities. The Leadership Council is the elected leadership team of the Federation. It is made up of 10 members plus the Federation Executive Director, Associate Director, and the Treasurer. Though the group previously consisted of only sisters and leaders, the group recently added their first non-leadership sisters (representing the youngest 7% of sisters), as well as the first non-sister to the group.

This group meets several times a year to forward the purpose and direction of the Federation, plan the annual meeting, and carry on business. Co- chairs provide leadership and relate between meetings with the Federation staff.

The Federation is supported by:

The U.S. Federation congregations are broken up into regions and are now a part of the formal governance structure. Business and information can flow between the regions, the Leadership Council, Executive Director, etc. Currently there are four Regions:

The Federation sponsors several Committees, Programs and Projects. Committees which are established by the Leadership Assembly/Council to promote the goals and purposes of the Federation. Membership includes sisters, associates, staff colleagues, and the meetings are hosted by congregations/provinces around the country. Some committees plan and run programs; others carry out specific tasks for us all. These are collaborative efforts, which involve substantial commitment of time on the part of project staff. Current committees, programs, and projects include:

This is collaboration among the worldwide federations and congregations of St. Joseph. The International Centre is a center for promotion of the charism and mission, international in focus and experience, located in LePuy, France Much of the work of the Federation is carried on by

We relate to the Canadian, French, and Italian Federations, as well as the La Red Conference of Latin and South American Sisters of St. Joseph. There are Sisters of Saint Joseph in over 53 countries.

The Federation is a Civil Corporation, incorporated in Missouri and a Canonical Juridic Person. 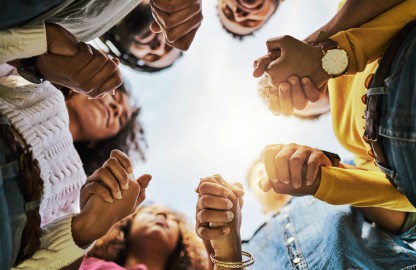 U.S. Federation of the Sisters of St. Joseph Congratulates the President-Elect and Recommits to Building God’s Beloved Community