French History We carry on the heritage of our founders, six French women who joined a Jesuit priest in 1650 to begin a community without cloister or habit and devoted to the needs of the ordinary people. They shared a profound desire for union with God and the "dear neighbor". The Sisters of Saint Joseph were among the first Catholic communities to be founded for the ordinary woman. They were not wealthy or educated and worked to support themselves especially by making lace, a common trade in that region of France. Today, those who are attracted to this still live among the people and offer their lives in love and service. The community grew.

In 1650, it was formally recognized as a religious congregation by the Bishop of LePuy. By the time of the French Revolution, it had spread through south central France in the region of the Valey. Then, caught in the political turmoil of the times, the congregation was disbanded. Some of the Sisters were martyred at the guillotine and others returned to their homes or went into hiding. After the revolution had ended, a heroic woman, Jeanne Fontbonne, who had narrowly escaped the guillotine herself, refounded the Sisters of St. Joseph at Lyon, France. She was known in the congregation as Mother St. John. Before long, the sisters were numerous again.

In 1836, a request came from the Bishop of St. Louis, Missouri for Sisters to teach deaf children. He had been advised by a friend in France to "…get the Sisters of St. Joseph because they will do anything". Six sisters crossed the ocean and came to St. Louis. Three lived in a log cabin in Carondelet, Missouri to found a school for deaf students. Three moved to Cahokia, Illinois and served the community there. From these origins, they spread across the United States beginning new foundations and now are members of the organization known as The United States Federation of the Sisters of Saint Joseph.

You can learn more about the U.S. Federation and it's history by checking out Avila University's digital archive. Check out the archives here.

Stimulated by the Holy Spirit of Love and receptive to His inspirations the Sisters of St. Joseph moves always towards profound love of God and love of neighbor without distinction

from whom she does not separate herself and
from whom, in the following of Christ
she works in order to achieve unity
both of neighbor with neighbor and neighbor with God
directly in this apostolate
and indirectly through works of charity

in humility - the spirit of the Incarnate Word
Philippians 2:5-11

in an Ignatian-Salesian climate: that is, with an orientation towards excellence
(Le dépassement, le plus)
tempered by gentleness (douceur) , peace, joy 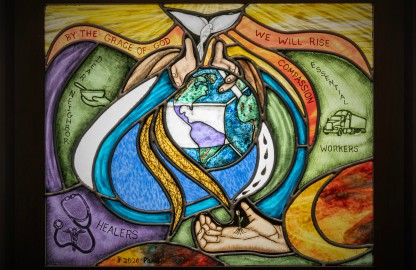 “By the Grace of God We Will Rise”